What is the ECOBIOBALL, and what does it look like?

ECOBIOBALL is the first and only golf ball in the world which, after being used and subsequently biodegrading, releases fish food. This is why we have defined it as ecological and biodegradable.

ECOBIOBALL is a single-use ball with a unique and exclusive design for practising golf close to marine environments (sea, ocean, rivers, lakes and ponds).

In addition to its non-contaminating properties, ECOBIOBALL is a product that brings an important added value to the environment, improving and increasing the sustainability and biodiversity of marine life.

Thanks to its innovative formulation, it starts to biodegrade immediately on being submerged in water. In less than 24 hours, its external coating starts to open, and in 36 to 48 hours the internal core, comprised of 100% fish food, is released into the water, where it can be eaten by fish.

At first glance, ECOBIOBALL appears no different to any other golf ball, because its physical characteristics are similar to those of a normal golf ball:

Given the special features of ECOBIOBALL, the distances that can be achieved when using them for practice are equal to or in some cases lower than the results obtained with the balls used on driving ranges, depending on the type of club used. In the case of short irons, the distance is exactly the same, while long irons may achieve up to 80% of the usual distance, and woods up to 70% of the usual distance. In any case, the purpose of ECOBIOBALL is not so much to obtain the maximum distance as to have the opportunity to practise close to marine environments without polluting them, and to bring an added value to such environments. 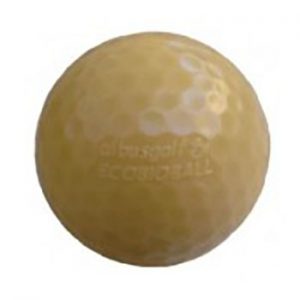 Buy now!HOT
WhatsApp
We use cookies on our website to give you the most relevant experience by remembering your preferences and repeat visits. By clicking “Accept All”, you consent to the use of ALL the cookies. However, you may visit "Cookie Settings" to provide a controlled consent.
Cookie SettingsAccept All
Manage consent

This website uses cookies to improve your experience while you navigate through the website. Out of these, the cookies that are categorized as necessary are stored on your browser as they are essential for the working of basic functionalities of the website. We also use third-party cookies that help us analyze and understand how you use this website. These cookies will be stored in your browser only with your consent. You also have the option to opt-out of these cookies. But opting out of some of these cookies may affect your browsing experience.
Necessary Always Enabled
Necessary cookies are absolutely essential for the website to function properly. These cookies ensure basic functionalities and security features of the website, anonymously.
Functional
Functional cookies help to perform certain functionalities like sharing the content of the website on social media platforms, collect feedbacks, and other third-party features.
Performance
Performance cookies are used to understand and analyze the key performance indexes of the website which helps in delivering a better user experience for the visitors.
Analytics
Analytical cookies are used to understand how visitors interact with the website. These cookies help provide information on metrics the number of visitors, bounce rate, traffic source, etc.
Advertisement
Advertisement cookies are used to provide visitors with relevant ads and marketing campaigns. These cookies track visitors across websites and collect information to provide customized ads.
Others
Other uncategorized cookies are those that are being analyzed and have not been classified into a category as yet.
SAVE & ACCEPT